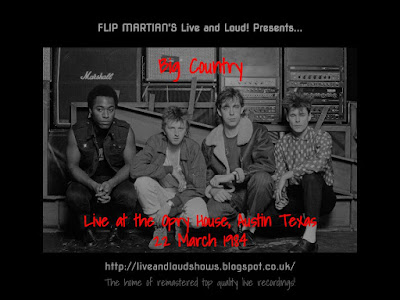 This show is Big Country from their tour of the USA in early 1984. They’d released their debut album The Crossing, in July 1983 and their latest single, Wonderland, had just been released a couple of months before this date in January 1984. You’ll hear that and most of The Crossing in this set, originally recorded for NBC radio in the USA. They spent over a month in America and then played a few dates in Japan before heading home and recording what became their first number 1 album, SteelTown, released in October 1984.

Most people would be happy with the original recording as it was - it was in pretty good condition apart from a few vinyl scratches and pops (most of which I hope I caught and removed). But with some EQing and a sprinkling of some studio magic, its improved it in a big way - more space, improved bass and...well  "oomph" really! It sounds really excellent now; I was very pleased with how this one turned out.

The show is available for download HERE as one 320 kbps MP3 file.