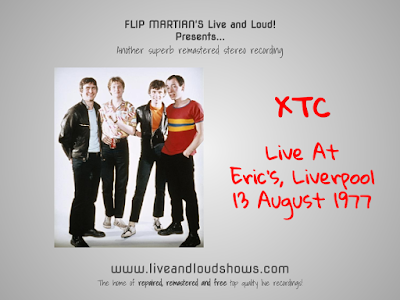 A debut on Live and Loud! for XTC - but surely not the last time they will appear (I now have a few of their gigs on my "to be done" list).

A very early gig this one - this was a soundboard recording from a gig played a couple of months before the release of their debut EP! It seems the source I received was worked on by someone at some stage, as, as so often happens, the loudness was off the scale almost and very unnatural, making it tiring to listen to. And quite toppy, with a shallow 2 dimensional aural range. So, I used EQ to not only improve the bottom end and clarity between the instruments but make it less tiring on the ears. Several hours of work later and it's a great show; the band are full of energy and it's a great - if short! - set.

Setlist
Radios In Motion
Cross Wires
Let's Have Fun
Fireball XL5
Science Friction
I'm Bugged
New Town Animal
Hang On To The Night
All Along The Watchtower
She's So Square
Posted by Flip Martian at 07:04 10 comments: