Just to let you regular visitors know that I'm taking a short break for a few weeks. This IS only a short break though - I'll probably be back with a show or 2 before Xmas but first, I have a few things I need to get done in the studio (and a holiday to go on!).  LOADS more to come when I get back, into 2018 and beyond - radio sessions and, of course, live shows - so don't go anywhere!

I jsut want to take the opportunity to give a big thanks to those of you who share the links out and to those of you who have donated and helped with my costs - every donation has been much appreciated - hope you've been enjoying the files you get in return!

Just as a catch up on this year so far - 2017 so far has seen 32 new remasters, 17 from bands new to the Live and Loud! archive. For the record, this is what's been done in 2017 up to now - you'll find them all by clicking on the artists names on the right hand side of the page where you can download these and all the others for free! 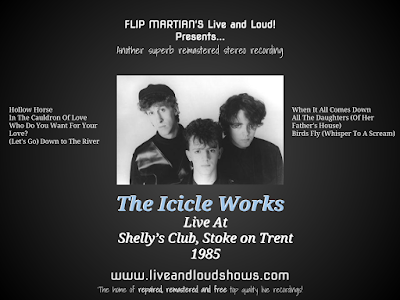 A debut on Live and Loud! for The Icicle Works, with a show from an unknown date in 1985.

This was a flat and slightly tinny sounding recording of an FM broadcast from 8 October of a gig played sometime before then but certainly sometime that year as it features songs from not only their first album but the second album too - which was released in September 1985.

I used a wee bit of noise reduction but mainly EQ to improve the bottom end, make the drums and bass more audible, and get some clarity between the instruments and vocals.

Setlist
Hollow Horse
In The Cauldron Of Love
Who Do You Want For Your Love?
(Let's Go) Down to The River
When It All Comes Down
All The Daughters (Of Her Father's House)
Birds Fly (Whisper To A Scream)

Posted by Flip Martian at 10:32 8 comments: Links to this post