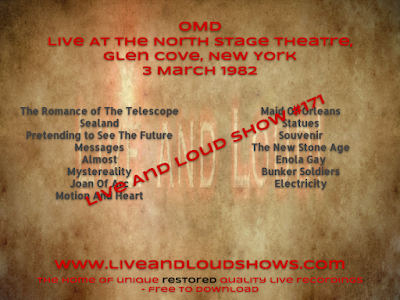 A quick request. If you plan on downloading this and putting it on your YouTube channel or your own bootleg page - I don't mind. But a credit to this website where you found it, and a link back to this page would be really appreciated. It helps me gauge which artists are popular - ie more chance of other restorations coming. Don't just steal it and take the credit (yes you, "Motion and Heart" channel). Thanks.

So, another show from OMD - this time from their Architecture and Morality tour of 1981/82. This was a gig labeled as Washington DC 13 February 1982. The only trouble with that is they played Washington on 1 Marsh 1982. And they were in Belgium on 13 February. But as it turns out - this gig was neither of those. I am indebted to the rather excellent OMD Live site for providing the correct venue and date.

And finally... don't forget to SUBSCRIBE TO THE NEW FREE NEWSLETTER so you never miss news on which new gigs are going to be restored and uploaded here; any news will be delivered to your inbox and I guarantee you no spam - and of course you unsubscribe at any time.