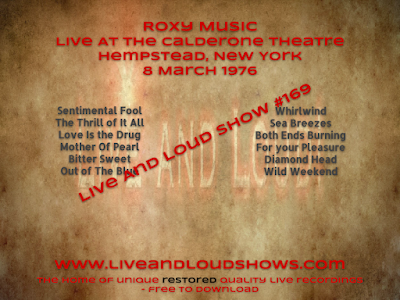 This was an FM recording originally I think - and another of those I found online where the only copy was marked as a "remaster" by someone else from some point in the past. In truth, it was very loud and very muddy and was really tiring to listen to - so much so I had to strip all that out before I could listen to it all the way through to find and fix any faults.

I did that by spending an hour or so using a 30 band EQ which was like taking a clean, dry cloth to a misty window - lots more detail came out - drums, bass, guitar, keyboards, violin, sax, vocals, etc - all far clearer and you can now hear the quality of the band's playing shine through. And it would no longer give you a headache after a few minutes (with apologies to the original remaster-er if he's out there - I guess we have very different tastes).

Fortunately, after the EQ, there were only 1 or 2 small tape dropouts to fix and then I got to work with the studio tools. Noise had been generated by the previous loud mastering, so I gently removed most of that without affecting things much. The EQ had done most of the work, so a final run through with some mastering tools and the job was done.

Really pleased with how this sounds now - for any Roxy fans who have this gig already - try this one, I think (and hope) you will be very pleasantly surprised. You can now download this restored show exclusively for free, right HERE as one 320kbps MP3 file.

Either way, enjoy the show! Before you go - check out more restored Roxy Music show HERE.

Posted by Flip Martian at 10:08 No comments: 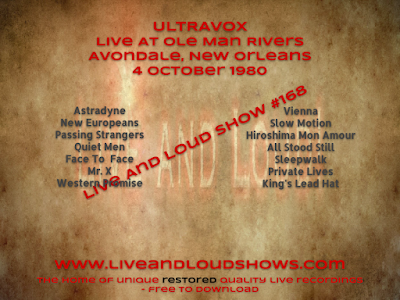 This is an interesting and lively gig from the still relatively new Ultravox line up, who had released their first single, "Sleepwalk" and album "Vienna" a few months earlier, and were in America and Canada for several months before they they returned to the UK for a tour of larger venues starting in December.

Some interesting variations on well known songs, a few mistakes (especially in the first few songs) but overall a really strong performance all await... As well as Midge getting a bit stroppy with the house engineer over a lack of monitoring... You will also hear Billy Currie credited at the end as playing "lead keyboards, guitar and violin" - Billy was playing 2nd guitar on the song "Face To Face" (the jangly guitar line - that's him).

Firstly, as always with audience recordings, the ambient room reverb was partially removed to give me more sound to work on. Then, some rebalancing of the stereo image was required, and then I had to remove a really odd noise that appeared loudly in 1 of the first 3 songs, which took a while - completely gone now. After all that, it was onto the studio tools including EQ, to create more space between all the instruments, bring up the sound of the band and tighten up the sound.

Really pleased with how this sounds now - a must for any Ultravox fan, I would say (and I am one). You can now download this restored show exclusively for free, right HERE as one 320kbps MP3 file.

Or, if you would like to have separate, fully tagged MP3s or lossless FLACs, head on over to the Donations tab to see how you can obtain these for a very small donation towards the site costs. Absolutely no obligation to do so of course. Either way, enjoy the show!

I am indebted on this occasion to someone referenced in the note accompanying the source files for this show simply as "RH", who originally taped this from the audience on the night. For an audience recording, it was far clearer than most (incidentally, you might see this same source elsewhere on British bootleg sites dated "10 April 1980" - that date is wrong, purely down to the American source tape being labeled "10/4/80" - Americans write the month first, not the day - it's definitely October 4, 1980).

Posted by Flip Martian at 09:10 No comments:

Email ThisBlogThis!Share to TwitterShare to FacebookShare to Pinterest
Labels: 1980, Ultravox 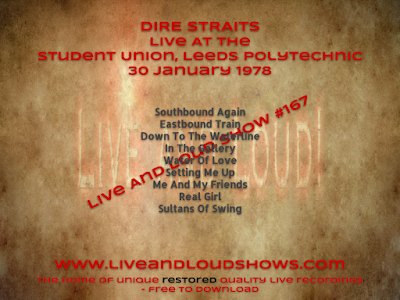 A rather wonderful snapshot of very early Dire Straits, in this soundboard recording taken from a date on the Talking Heads tour of the UK in early 1978, where Dire Straits were support band. The original bootleg I received was dated "31 January 1978" but every source online I found points to this gig actually being on the 30 January, so that's what I've gone with here.

Someone at some point had cleaned this up a little - there was little hiss and "Southbound Again" fades out before the end, with Eastbound Train fading in - but the recording was still unbalanced at times, and quite flat and dull, like most soundboards can be.

So I got to work on the stereo image, rebalanced that, then got to work improving clarity and punch with EQ and other studio tools. There is now "air" between the guys in the band, so you can hear everything much more clearly, and it sounds far clearer and, well just more "live" and exciting. A little final mastering and the work was done.

You can now download this restored show exclusively for free HERE as 1 MP3 file.

Setlist
Southbound Again (fades out)
Eastbound Train
Down To The Waterline
In The Gallery
Water Of Love
Setting Me Up
Me And My Friends
Real Girl
Sultans Of Swing
Posted by Flip Martian at 06:10 No comments: