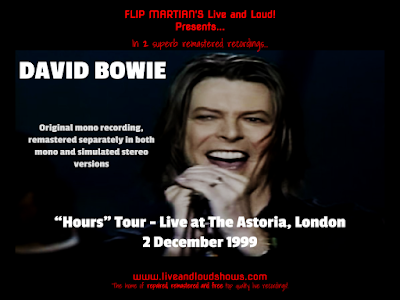 It's been a while since I did a Bowie show - long overdue! This is a great show from the short (but perfectly formed) "Hours" tour in 1999 with plenty of banter with the crowd from Bowie throughout, not to mention some great versions of songs.

The source files were in rather dull and muddy mono - the text file with the lossless source files claimed it was a soundboard recording (I think it's either that or a mix from a video soundtrack). After transferring the files to 1 .wav file and sorting out a few clicks and some sound level variations, I decided to remaster the show in mono but then also to separately create a simulated stereo recording from the source files, then remaster that too.  So this show has been done twice - once in mono and then again in stereo (just turning the remastered mono into stereo just wouldn't have sounded too good).

So 30 band EQ came in useful on 2 separate occasions this time - each version needing handling differently to refine and clear up the bottom end and roll off harsh mids and upper frequencies, to bring some clarity to the mix (Sterling Campbell and Gail Ann Dorsey are now rather clearer in the mix than before). I think the results are more than worth it. For me, I think the bottom end is clearer in the mono version but the stereo version sounds "bigger" - in any case, both are here for you to download and see which you prefer!

Here are the links for you to download the improved recordings for free as one tagged 320 kbps MP3 file:

Or, if you would like to support the site with a small donation towards storage subscription and internet costs, in return you can have both versions of the show for the price of 1, as separate, properly tagged MP3s or lossless FLAC files; head on over to the Donations tab to see how you can do this.

Setlist
Life On Mars?
Word On A Wing
Thursday Child
Ashes To Ashes
Survive
Can't Help Thinking About Me
China Girl
Always Crashing In The Same Car
Something In The Air
Drive In Saturday
Stay
Seven
Changes
Rebel Rebel
Repetition
The Pretty Things Are Going To Hell
Cracked Actor
I'm Afraid Of Americans

Posted by Flip Martian at 11:44 No comments: 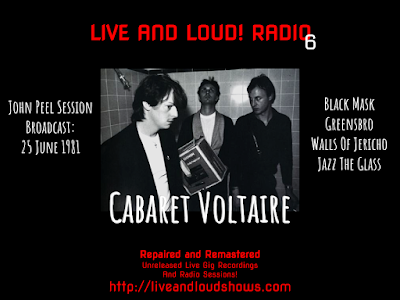 This show is now offline due to a copyright claim. Sorry about that. No idea from who - all I know is what my cloudspace tells me***

The zip file for this session contains remastered MP3 and FLAC versions as a free bonus for those of you who like lossless!***LINK REMOVED***

Posted by Flip Martian at 03:53 No comments: