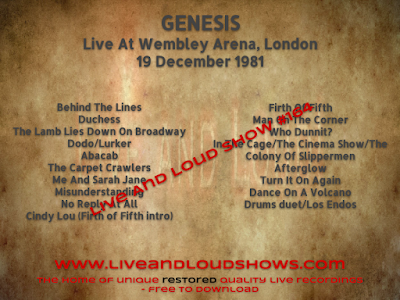 A first appearance on Live and Loud! for Genesis, in a restored live audience recording taken from one of the last dates of their Abacab tour of 1981 at Wembley Arena.

Originally a vinyl triple album bootleg, the files I acquired were a direct transfer (in lossless FLAC format) from that. And pretty quiet. And noisy. And not the clearest recording I've ever heard, if I'm honest! I could write a small book on what I did with this one but I will spare you the gory details and summarise...

Vinyl crackle was very loud, recording level of the music was pretty low...crackle removed.
It was an audience recording from an arena, so lots of reverb...so that meant reducing the reverb ambience and ensuring the music levels were louder so I could work on them.
Recording levels were up and down all the way through...so I tried to increase the low levels as much as possible and even out the tape dropouts where they appear, without sounding like it was compressed or limited too much. It's now far better in that regard but not perfect. The perils of automatic recording levels back in the day, I guess.
Ssssome pretty bad sssSSSibilance too in places...I did what I could to tone that down.

Eventually I had a sound file to get to work on, with EQ and other studio toys to clear up the muddy sound, bring out some details and dynamics where I could and generally make it a nicer listening experience.

Do be aware there is a long (and slightly rude) story from Phil Collins before 1 song - I left it in along with all his introductions as they're part of the gig experience - but I only mention it here to say there is part of it missing from the recording. At a guess, maybe this was where someone had to turn the tape over on the night, I don't know. There is also 1 track missing from the set - the last track ("I Know What I Like") wasn't included on the recording.

It will never sound like a crystal clear FM or soundboard recording but it's substantially more listenable - and enjoyable! - now. You can now download this restored show exclusively for free HERE as 1 (rather large - it's around 2 hours) MP3 file.

Setlist
Behind The Lines
Duchess
The Lamb Lies Down On Broadway
Dodo/Lurker
Abacab
The Carpet Crawlers
Me And Sarah Jane
Misunderstanding
No Reply At All
Cindy Louise (Firth of Fifth intro)
Firth Of Fifth
Man On The Corner
Who Dunnit?
In The Cage/The Cinema Show/The Colony Of Slippermen
Afterglow
Turn It On Again
Dance On A Volcano
Drums duet
Los Endos

Posted by Flip Martian at 08:41 No comments:

Email ThisBlogThis!Share to TwitterShare to FacebookShare to Pinterest
Labels: 1981, Genesis 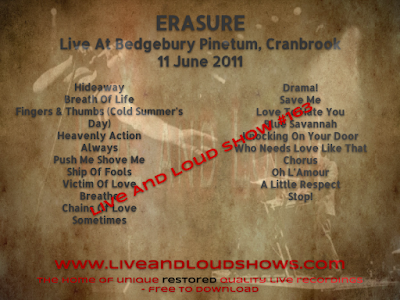 Early fans of Live and Loud! may remember an earlier version of this show when Live and Loud! was solely available via internet radio. For various reasons, the show wasn't made available afterwards, or repeated. And wasn't added to the archive (that's this site) when that was set up in 2014.

So it's been lost forever. Until now...

I found it recently in an old set of files and knowing there was interest in hearing an Erasure live show, I could have just uploaded the file, created this page and said "job done". But I didn't - I went back to the show and got to work on it again. 8 years later, I think I'm a bit better at this - and I certainly have better software at my disposal, to make it sound better than it did when I originally did it back in 2013. So that's what I did. And it sounds much better now.

The new version of this full length show is now available to download exclusively for free HERE as 1 MP3 file.

Setlist
Hideaway
Breath Of Life
Fingers & Thumbs (Cold Summer's Day)
Heavenly Action
Always
Push Me Shove Me
Ship Of Fools
Victim Of Love
Breathe
Chains Of Love
Sometimes
Drama!
Save Me
Love To Hate You
Blue Savannah
Knocking On Your Door
Who Needs Love Like That
Chorus
Oh L'Amour
A Little Respect
Stop!