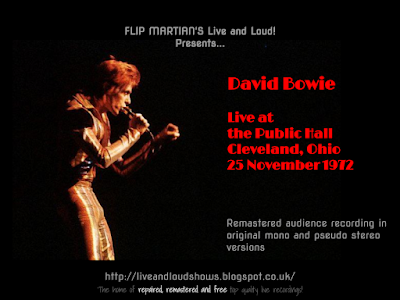 This is a remaster of a recording by someone from the audience on the night (update: that person has got in touch with some more details - see the comments section below). As such it might not be as clear as most of the gigs on the archive (especially the first track, where the sound engineer on the night took a few minutes to get things sounding ok).

2016 has been a bad year for many. It was also the year David Bowie passed away which affected me and many others more than I guess we would have thought, so I wanted to do something from him to close the year as a mark of respect. This gig catches him coming towards the end of his first proper US tour. The recording - recorded in the crowd, on tape,  over 40 years ago is a remarkable record of a great gig, with Bowie chatting in between songs. I spent more than a few hours on EQ'ing this but fortunately otherwise there wasn't too much to do.  There are a couple of instances where the song fades out and back in - these were on the original recording and have been left as is.

The original recording is in mono, so I took the opportunity to do a simulated stereo remaster as well, as a separate exercise. So now you have a choice, you can have it in remastered mono, or you can have the "stereo" version. Or of course you can download both.

The show is now available to download exclusively for free at these links:


Setlist
Hang On To Yourself
Ziggy Stardust
Changes
The Supermen
Life On Mars
Five Years
Space Oddity
Andy Warhol
Drive In Saturday
The Width Of A Circle
John, I'm Only Dancing
Moonage Daydream
Waiting For The Man
The Jean Genie
Suffragette City
Rock'n'Roll Suicide
Posted by Flip Martian at 10:38