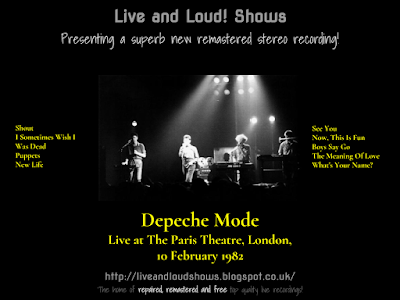 Live and Loud! started in 2012 with a show by Depeche Mode, so it seems fitting that the 100th live show remaster is also by Depeche Mode! This time, a show recorded for the BBC back in early 1982 and the 3rd show I've done lately that was originally recorded for the Live In Concert series at the Paris Theatre (Dramatis and Fatal Charm being the others).

Like those, this is about half an hour long and comes from a point when Alan Wilder had just joined the band after Vince Clarke left. Featuring a mix of tracks from Speak and Spell, b-sides and 2 new tracks, See You and The Meaning of Love, this recording has had some noise removed, a couple of defects fixed and then EQ applied to make it sound nice and clear and bring out the bottom end a bit so the kick drum actually kicks a bit.

Setlist
Shout
I Sometimes Wish I Was Dead
Puppets
New Life
See You
Now, This Is Fun
Boys Say Go
The Meaning Of Love
What's Your Name?
Posted by Flip Martian at 09:19