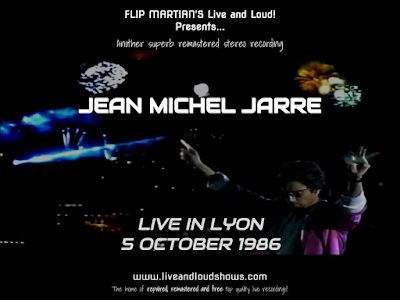 This is a concert from 1986, as part of Lyon's celebrations welcoming Pope John Paul II to the city. I wonder what he thought of it! Anyway, the recording... This concert was actually released on VHS at the time but this recording I've uploaded for you is actually taken from 2 separate recordings of FM broadcasts - both of which were incomplete. I won't tell you where the join is, but hopefully it's not too easy to spot now!

But there was a lot of work - both recordings were at different speeds, for a start...and sounded quite different. Only when they were at the same speed and sounding similar, could I put them together, then start denoising what was quite a hissy recording, repairing inconsistencies in volume, then using the trusty 30 band EQ to remove a harsh top end and bring back the lower end, which was quite lacking (except on some "far too loud!" Simmons drum fills in various tracks which needed treating all by themselves). This was all a lot of work but I think it was worth it. So I hope you enjoy it too!

Incidentally, no setlist anywhere makes mention of Second Rendez-Vous Part 3 making a reappearance at the end of the show on the night - but it existed on the recording I was given. I suspect it may not be from Lyon at all, as it cuts in rather sharply. It doesn't sound too out of place, so I left it in. Also, Jarre introduces his musicians over the encore and the music goes very quiet (how it was broadcast at the time I expect) and the FM noise and hiss gets quite bad at that point. I removed a lot of it, but left some as Jarre was in danger of sounding like he was speaking from the bottom of the sea...

Anyway, enough of my yakking... You can download this new and improved (and hopefully unique) recording for free here as 1 320kps MP3 file.

Or, if you would like to support the site with a very small donation and in return receive separate, properly tagged MP3s, or even lossless files in FLAC format, head on over to the Donations tab to see how you can do this. Either way - enjoy the show!

Incidentally, if you're a fan of Jarre, you may well enjoy this 2 hour online radio special I did with many rare tracks and mixes, available to stream here
Posted by Flip Martian at 04:58