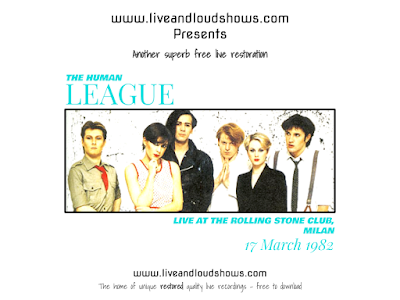 A gig from this tour has been requested more than once over the years - and finally I can deliver. An interesting and rare recording of The Human League on the European leg of their Dare tour in 1982.

I've obtained more than 1 recording of this gig over the years of different quality - and also like the Japan gig I did recently, attributed to different places...including the gig of 14 March 1982 in Lyon, France...but given they are the same gig, Philip Oakey says "ciao!" and refers to them next time playing La Scala at the end of the gig, and (possibly) Jo Callis says "arrivederci!" I think we can assume they're actually in Milan. :-)

There's a bootleg called "Drumset Mystery" of this gig - and the copy I heard of that too was pretty poor quality and very hissy. I think this must be a different recording altogether of the same gig, it sounds like it was recorded nearer the front of the audience. In any case, I went through this and spent a few days on it - removed some of the room ambience, fixed gaps, errors, tape drop outs, clicks and odd noises, overloaded volume, changed the pitch and speed as it was running slightly too fast, then treated and EQed the sound to get as much as possible out of what was there.

I'm pleased with the result; I hope you enjoy it. Other sites are starting to take these restorations, butcher the artwork and put it up on their own site with filled with advertising and pop up links - only from here are you guaranteed no pop ups, no advertising, no viruses - just the show itself.

You can safely download this restored recording for free HERE as one 320 kbps MP3 file with no nasty pop ups or ads getting in the way. Or, if you would like to support the site with a small donation towards storage, subscription and internet costs, in return you can have the remastered show as separate, properly tagged MP3s or even lossless files in FLAC format; head on over to the Donations tab to see how you can do this.

Either way - enjoy the show! And don't forget to check out the other Human League shows on the site!

Email ThisBlogThis!Share to TwitterShare to FacebookShare to Pinterest
Labels: 1982, The Human League