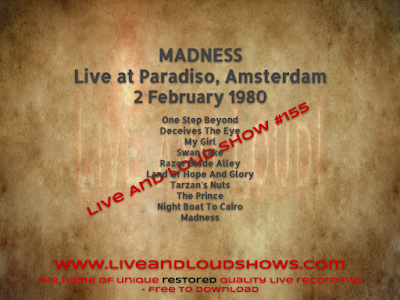 This is another of those recordings I thought would be quick and easy. I had a 6 track recording of Madness from this gig - an old FM radio broadcast. I spent some time working on it, announced what I was doing on the Facebook group and page and one of my listeners got in touch to say he knew of a 10 track version! Once he pointed me in the direction of it (only in MP3 format unfortunately) and I had a listen, I scrapped everything I'd done on the 6 track version and set to work on this one - I took the view it was better to have 10 tracks than 6, despite the slightly inferior source quality.

After converting it to 1 long WAV, the first thing was - it was way too fast and high pitched! Suggs sounded like he was on helium and the whole band was on speed (!) so I spent a fair bit of time matching the pitch and speed to other recordings from the same year before doing anything else. Then it was correcting a few glitches in the recording - tape dropouts etc. Then 30 band EQ to bring back some low end and remove a harsh high end, before finally moving to the mastering which tightened up the whole recording a lot.

The result is now available for free on this page and sounds really good. You can safely download this restored, unique recording for free HERE as one 320 kbps MP3 file with no nasty pop ups or ads getting in the way.