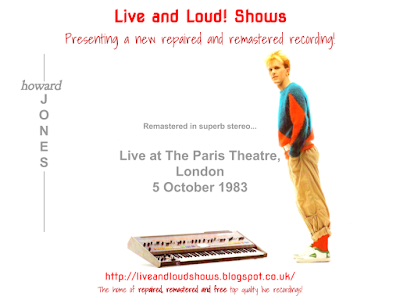 This show is now offline. I have been asked to remove it as there is a chance of the recording being made available on a future release. As per the site ethos - nothing stays here if its released, or if I'm asked to remove it pending a release. So if you're interested in this show, please keep an eye out on HJ's official news groups and pages for when this might become available. This page is now here for information only.

Some time back I was asked if I could find an early Howard Jones recording - it took a while but I finally found some and this was the earliest. Someone had already worked on this and to be honest it sounded pretty bad - far too loud, noise pushed up too and the sound balance was lopsided! So I spent some time fixing the sound balance, removing some noise and then EQing to remove the worst of the OTT bass that had been added and tidy up the rest.

Interesting to hear Howard introduce What Is Love? as just "Love" first of all, before correcting himself - that was its original title (you can hear a very early version of the song if you read on to the bottom of the page!).

Anyway, the gig does sound nice and clear now, just a shame its a little short!

Update 2019
While preparing this old show as separate files for a donator to the site, I found I could now improve the sound quality further, over what I’d originally done to the recording several years ago. You can now download this new version (as of 2019) HERE as 1 new 320kbps MP3 file.

Setlist
New Song
Conditioning
Dreams Of A Better Place ((early version of Dream Into Action)
What Is Love?
Equality

And for those of you who have read to the end of this page - there's an extra freebie for you as a reward! ;-)

I came across what was labeled as some early Howard Jones demos, including a very early version of What is Love? The file says 1977 - can't tell you whether that's accurate or not - and a couple of people below refuse to believe its even HJ at all - but I thought it would be a nice little extra to throw in as this gig is quite short and you can make your own minds up. Please note, I've not done anything with the sound on these, they are "as is" so a bit noisy and old sounding!

You can download the zip file containing 5 tracks here.