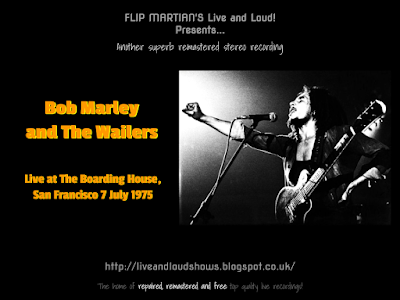 This week, its rather hot in the UK so a good time for some Bob Marley!  This was a show originally from FM radio in the USA. The source I was working on had already had the intro taken off and was at the wrong speed slightly - I then came across a slightly better quality recording with the intro on it with speed correction done and reduced hum. So I started again, using that one.

There were a couple of flaws in the recording which I've tidied up as best I could, then removed the original radio announcer who talks over the start. Then it was out with the EQ to bring out the instruments and voices more clearly as per usual. Some of the tracks have low level distorted bass on them - normally I scrap anything with distortion but it doesn't affect every track and the rest of the gig is such a great performance it would be a shame to not let it out there.

Despite that the finished result is a nice, clear stereo recording which sounds great overall now. Especially on a hot sunny day! The show is available to download here as 1 MP3 file.

Setlist
Trenchtown Rock
Burnin' and Lootin'
Midnight Ravers
Them Belly Full (But We Hungry)
Rebel Music
No Woman, No Cry
Kinky Reggae
Stir It Up
Lively Up Yourself
Get Up, Stand Up
Posted by Flip Martian at 10:03

Email ThisBlogThis!Share to TwitterShare to FacebookShare to Pinterest
Labels: 1975, Bob Marley and The Wailers