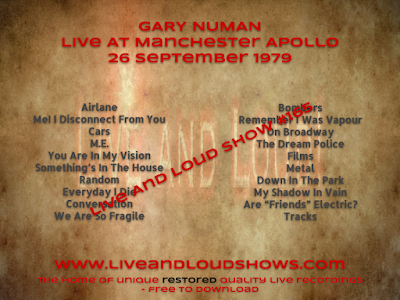 Live recordings of Gary Numan from his first national tour in 1979 are few and far between - and those that exist in the public domain (all audience recordings) are very poor quality generally. But thanks to a few donations over the last year or so, I have been able to invest in better software, so I thought I'd have a go at repairing this one - not quite realising just how much time it would take up!

You can hear a snippet of what the BEST of the original recording sounded like in the intro to the show but this one took a lot of work. A brief list of things fixed for this one...All these things listed are now gone, as best as I can so, so don't worry.. ;-)

First thing I did was reduce the hall "reverb" - the show sounded like it was recorded from the back of the hall (or possibly from the toilet in the bar outside the hall...!) and the band were a long way away. It was hissy (of course). Recording levels were low. Bass distortion in places too. It was too fast and high pitched, there were odd gaps, tape dropouts so all the way through the volume was up and down on the left and right channels (not always at the same time), the sound COMPLETELY changing in quality for a couple of seconds...why? No idea...

There were also some random beeps part way through, which had nothing to do with the gig - I can only think whoever transferred this to digital format used demo software that inserted the beeps! There were also a whole bunch of scuffling banging noises - I think the tape recorder was being moved about during the first few songs and the mic was brushing something.

Sadly, the last part of "Bombers" is missing - I guess that's where the tape ran out and needed turning over. Some things I can't restore - rather than it just STOP as it did on the original, I faded it out and back in as it goes into Remember I Was Vapour. And finally - of course, being recorded from a tape recorder in a hall full of people in 1979, it was in mono.

Once all the above was worked on, only THEN did I get to EQ and use the sound improving tools to improve the sound. In all, this was probably the equivalent in man hours of several days work. Working on a show like this there will always be some compromise in the final EQ choices and it was never going to sound as clear as Living Ornaments 79 of course - or even the full Living Ornaments 80 from Manchester (that was originally a soundboard recording, so far clearer source material) but I think you now have an alternative 1979 live show which is finally listenable!

You can now download this restored show exclusively for free HERE as one 320 kbps MP3 file (some phones and tablets have issues downloading the MP3 from the host site so you may need to use a computer).

If you would like to have separate tagged MP3s or FLACs of this show and show your appreciation for the work put in on all these shows on the site, please head on over to the Donations tab to see how you can obtain separated, tagged files these for a very small donation towards the site costs: a full set of MP3s for £2, or lossless FLACs for £5, ready for you to burn to CD if you wish. Absolutely no obligation to do so, of course.  Either way, enjoy the show!

Setlist
Intro
Airlane
Me! I Disconnect From You
Cars
M.E.
You Are In My Vision
Something’s In The House
Random
Everyday I Die
Conversation
We Are So Fragile
Bombers
Remember I Was Vapour
On Broadway
The Dream Police
Films
Metal
Down In The Park

Encore
My Shadow In Vain
Are "Friends" Electric?