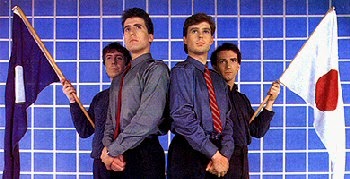 This was just under 1 hour taken from an FM radio broadcast of tracks from a gig from the Dazzle Ships tour. I've seen 2 dates for this gig - 22 and 28 April. Thanks to those of you who contributed below - I think we can safely say its now from the 28 April 1983 (you can see a scan of a ticket below). Incidentally, I've been reliably informed that the support that night was provided by The Cocteau Twins.

This recording originally had some gentle noise reduction applied and then 30 band EQ and sounded much better than it did!

2019 UPDATE: While preparing this old show as separate files for a donator to the site, I found I could now improve the show further, over what I’d originally done to the recording several years ago. I worked out it was actually running slightly too slow, so I've corrected that. Paul now doesn't sound like he's taken tranquilisers while singing on Souvenir...! Some extra EQ tweaks and it was done. 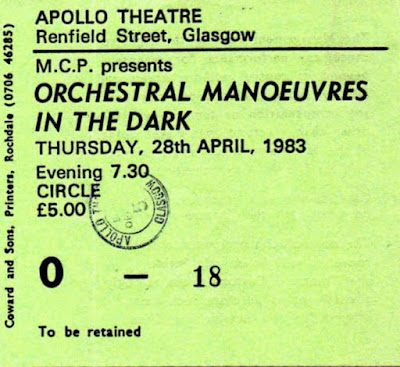 Email ThisBlogThis!Share to TwitterShare to FacebookShare to Pinterest
Labels: 1983, OMD