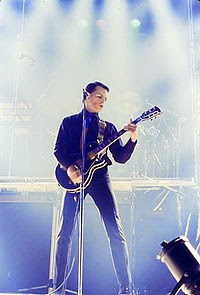 Gary Numan followed up his debut national tour of the UK in the Autumn of 1979 by taking the Touring Principle tour into Europe and then across the world. By early 1980 he was touring the USA and Canada. This set features some changes from the UK tour, including an early version of Remind Me To Smile, which featured on the Telekon album released 8 months later.

This (I'm pretty sure) was originally a a soundboard - sounds to me like a soundboard as its quite flat (or it was before I EQ'ed it) but its not the complete gig either, which is unusual (but not unknown) for soundboards. It's also mono - which soundboards often were at that time. Anyway, I tidied it up a bit and its a great addition to any Numan collection with some raw sounding synthing all the way through!

UPDATE: While preparing this old show as separate files for a donator to the site, I found I could now improve the sound quality further, over what I’d originally done to the recording back in 2012 and I've also played with the sound so it sounds more stereo than mono; this is an all new version, really.

Setlist
Airlane
Me! I Disconnect From You
Praying to the Aliens
M.E.
Films
We Are So Fragile
Are 'Friends' Electric?
Remind Me to Smile
Conversation
Metal
Replicas
I Die: You Die
Down in the Park
Bombers
Tracks
Posted by Flip Martian at 08:17