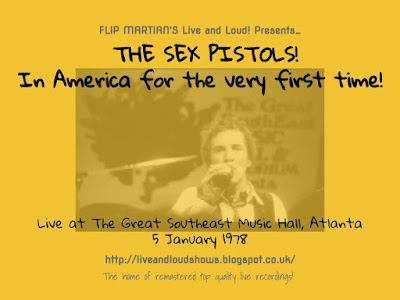 Setlist
God Save The Queen
I Wanna Be Me
Seventeen
New York
Bodies
Submission
Holidays In The Sun
EMI
No Feelings
Problems
Pretty Vacant
Anarchy In The UK
No Fun
Liar
Posted by Flip Martian at 09:10 3 comments:

The future of Live and Loud! is right here

Hi all. We did have some technical issues with broadcasting the latest Live and Loud! show (the Bowie 1996 show which is already proving really popular) and so I've taken the decision that Live and Loud! shows will be uploaded to here directly when they're ready, rather than on internet radio first.

Keep in touch with announcements by either bookmarking/saving this site as a favourite, or following me on Twitter, or if you're on Facebook, there's a Flip Martian page you can like, and/or a group to join. All latest shows will be posted there when ready.

Live and Loud! continues to be popular - this archive now has over 39000 hits and there have been over 15000 downloads. So stay tuned, lots to come, as I've noted in posts before. Next up, in about 10 days time - The Sex Pistols, from 1978. And do keep letting me know what you think of shows, and indeed, if you have any requests - I've had requests recently for Big Country and Crowded House, and they're both coming soon.

Cheers!
Posted by Flip Martian at 02:19 No comments: 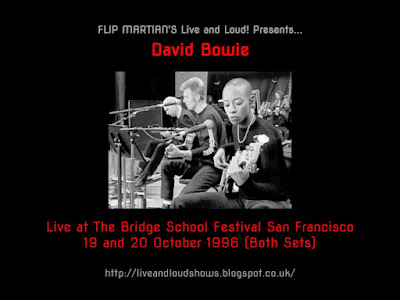