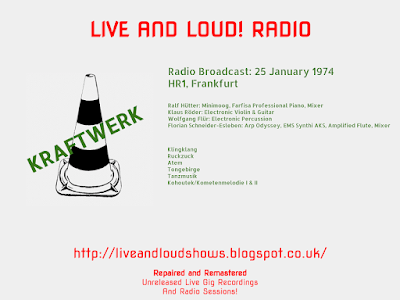 Live and Loud! Radio is an occasional series of free downloads, starting January 2017. Radio sessions that never got an official release, sympathetically repaired and remastered and then released onto the internet.

No theme tune, no intro from me - just the original session, repaired and remastered and available in a downloadable zip file.

This is a concert specifically created for radio - Kraftwerk were top of a bill featuring 3 acts - more information is available in the download.

The zip file contains the show and a text file with more information about the original concert and a translation of the German radio announcer. You can get it by clicking here.

The original recording has a basic mix with each instrument in a particular place in the stereo image - electronic percussion was bizarrely over on the extreme left, so I've reshaped the stereo image and moved the percussion slightly just to take away the unpleasant effect of having the percussion overload the left hand side too much. I then used 30 band EQ to enhance bass and upper frequencies, creating more "space" in the tracks between the instruments and bringing out detail which you can't hear on the original (to those interested, a screenshot of the EQ is in the zip too).

If you know anyone who wants a copy of these tracks, I'd rather you redirect anyone to this page for a copy but if you do redistribute please use the original zip with the tracks and info file! Thank you. :)
Posted by Flip Martian at 05:59 2 comments:

Email ThisBlogThis!Share to TwitterShare to FacebookShare to Pinterest
Labels: 1974, Kraftwerk 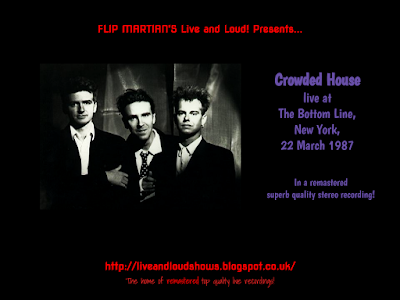 Setlist
This Is Massive
When You Come
Mean To Me
World Where You Live
That's What I Call Love
One Step Ahead
Recurring Dream
Something So Strong
Love You 'til The Day I Die
Hole In The River
Don't Dream It's Over
Now We're Getting Somewhere
Throw Your Arms Around Me
Tombstone (with Love in the Fowl House ( Pretty Little Hen) / Anarchy In The UK)
Better Be Home Soon
Sister Madly
Not Fade Away
Posted by Flip Martian at 06:32 6 comments: 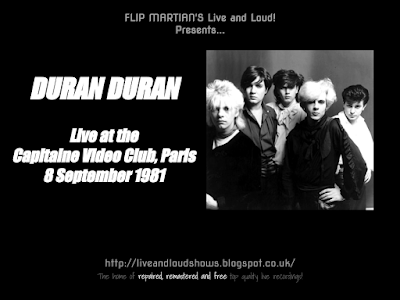 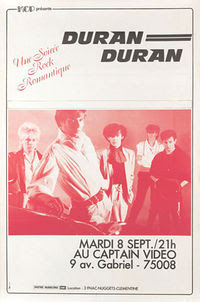 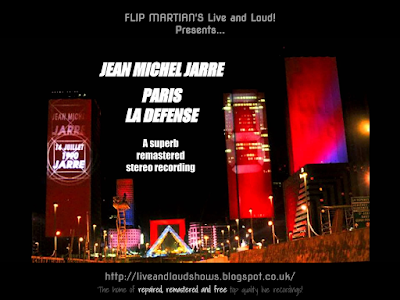 Incidentally, if you're a fan of Jarre, you may well enjoy this 2 hour online radio special I did with many rare tracks and mixes, available to stream here
Posted by Flip Martian at 15:31 8 comments: 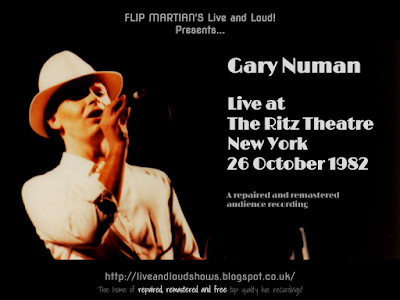 This is a remaster of a recording by someone from the audience on the night. As such it might not be as clear as most of the gigs on the archive. However, recordings of this tour are few and far between and all are poor quality, and some songs were never played live again, so I've done what I can to make this one listenable.

I could write a book on all the work involved in fixing this one. Of 3 sources, I started work on one only to find that 1 track in particular had lots of noises I couldn't remove on it, so I started from scratch on the next best source. Hours of editing, volume balancing, selectively EQing different parts to reduce the effect of distortion, reducing large amounts of tape hiss without killing the recording altogether, as well as the usual EQ to bring out the instruments and voice...well, I'm glad to see this one done, put it that way! I hope you think its worth it.

Setlist
This is My House
I, Assassin
Remind Me to Smile
Films
Crash
Music for Chameleons
She's Got Claws
Every Day I Die
Down in the Park
White Boys and Heroes
Cars
War Songs
We Take Mystery (To Bed)
This Wreckage
We Are Glass
Tracks 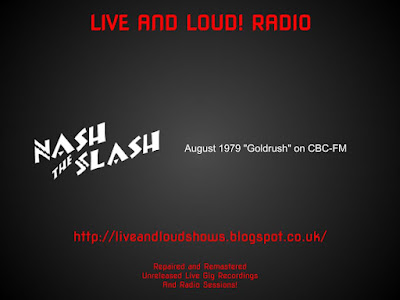 Live and Loud! Radio is an occasional series of free downloads, starting January 2017. Radio sessions that never got an official release, sympathetically repaired and remastered and then released onto the internet.

The session is available as a zip file, containing each track. You can get it by clicking here.

Original files had noise reduction applied via Izotope RX5 and then 30 band EQ to remove mid range muddiness and enhance bass and upper frequencies, creating more "space" in the tracks between the instruments. I didn't take away every last bit of hiss - frankly that can also remove a lot of the recording and end up sounding awful. Ultimately this is about preserving the music. But believe me, there was a lot more hiss on the original source files.

Some clicks and tape dropouts have also been repaired - you won't hear where. :)  The ones you can hear, I couldn't fix without access to a better copy (which may not exist, who knows?).

If you know anyone who wants a copy of these tracks, I'd rather you redirect anyone to this page for a copy but if you do redistribute please use the original zip with the tracks and info file! Thank you. :)