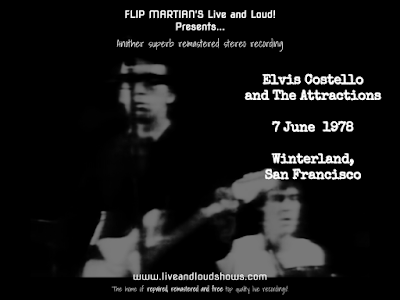 What's left is a really good and clear record of an energetic performance on the last night of the US tour. You can download this improved recording for free here as 1 320kbps MP3 file.

Setlist
Mystery Dance
Lip Service
The Angels Want To Wear My Red Shoes
Goon Squad
Less Than Zero
Blame It On Cain
The Beat
This Year's Girl
I Don't Want To Go To Chelsea
Pump It Up
Radio Radio
Lipstick Vogue
Watching The Detectives
Party Girl
You Belong To Me
I'm Not Angry
Posted by Flip Martian at 06:34 No comments: Links to this post 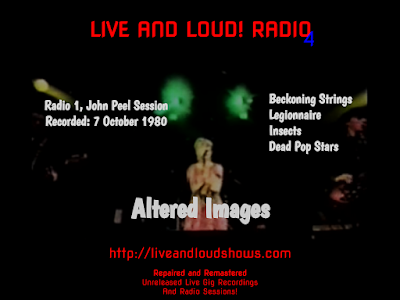 You can get it by clicking HERE.

Original files hiss reduction applied to reduce - but not eliminate completely - tape noise. Each track then had 30 band EQ to remove mid range muddiness and top end harshness. Bass was made a little clearer and more audible, while upper frequencies were toned down, creating more "space" in the tracks between the instruments. Finally, each track was faded out to soften the sharp cut off to each track on the original recording.
Posted by Flip Martian at 09:14 No comments: Links to this post