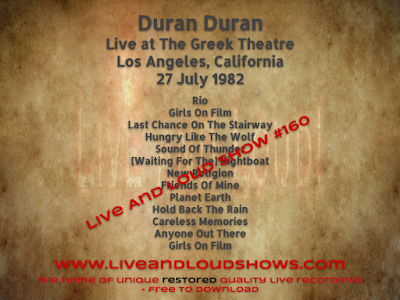 Another show generously donated by a listener to Live and Loud! He got in touch and asked if I could do something with this show - while I already have a 1982 show from Duran Duran on the archive (here), this one is a bit special, so it's well worth posting up on here.

It's from the last night of the USA leg of their Rio tour and features a version of Anyone Out There you might not have heard before! As an audience recording it wasn't in great shape and unfortunately Hold Back The Rain (a favourite of mine) isn't complete. But I worked on the recording a lot to improve the sound quality and now it gives you more of the feeling of being there at the venue, watching them play. You even get the annoying jerk talking next to you for part of the gig...sorry about that!

And as so often, the sound in the first track isn't quite as good as the rest - sound engineer not quite getting the sound mix right for a few minutes, probably - but after that it warms up nicely.

Or, if you would like to have separate tagged MP3s or FLACs, head on over to the Donations tab to see how you can obtain these for a very small donation towards the site costs.

Encores
Anyone Out There
Girls On Film

Posted by Flip Martian at 09:04 No comments: 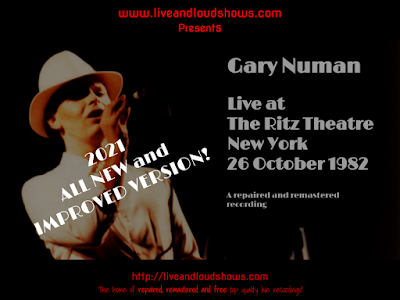 Yes, this gig has been done before...but when a friend of mine and listener to Live and Loud! got in touch with a different recording of this show, I took a listen and decided it was WELL worth working on, and replacing the older version with this. Show 88, with over 2200 downloads - and the most popular Gary Numan show I've done so far - is now offline and replaced by this one.

In 1982 Gary Numan spent a year in the USA. While he was there, he went on tour with a unique band; Chris Slade on drums, Pino Palladino on bass, Rob Dean from Japan on guitar and keyboards, Roger Mason and John Webb on keyboards. Recordings of this tour are few and far between - and usually pretty awful quality. Somebody somewhere might still have the original recording the copy I received was taken from - but they ain't sharing if they do! In any case, I doubt without some restoration work it would sound this good...this is the best available recording from that tour being shared out to the world.

It still needed a fair bit of work but was in better basic shape than the source for the previous version was. So after removing hall reverb, lots of studio magic and some final EQ and tweaking...here it is.

Or, if you would like to have separate tagged MP3s or FLACs, head on over to the Donations tab to see how you can obtain these for a very small donation towards the site costs.

Setlist
This is My House
I, Assassin
Remind Me to Smile
Films
Crash
Music for Chameleons
She's Got Claws
Every Day I Die
Down in the Park
White Boys and Heroes
Cars
War Songs
We Take Mystery (To Bed)

Encore
This Wreckage
We Are Glass
Tracks