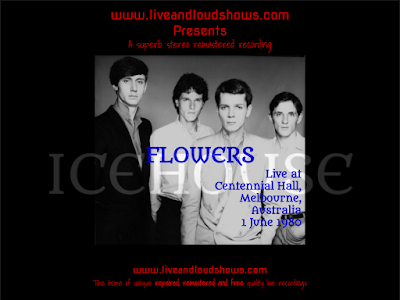 A debut for Icehouse this time - or more accurately, Flowers in this case as that was still their name back in 1980 when this gig was recorded from Australian radio.

This recording was originally 1 side of a C120 cassette (remember them?!) and was apparently transferred to digital from that - whoever recorded the original and whoever transferred it both did a great job! Apart from some tape dropouts and a few clicks which I fixed as best I could, the sound was pretty clear. Clearly it's not the complete gig - FM broadcasts so rarely are. 30 band EQ has tightened up and taken some rough edges off the bass and improved the clarity of the recording. I hope you enjoy the results!

I'm also aware the 30th anniversary reissue of Icehouse does have a whole heap of live tracks on an extra CD - however, I don't think any of those tracks are taken from this gig but I don't have a copy to hand to confirm that (I'll update this if anyone gets in touch). EDIT - the same listener below confirmed no tracks were officially released.