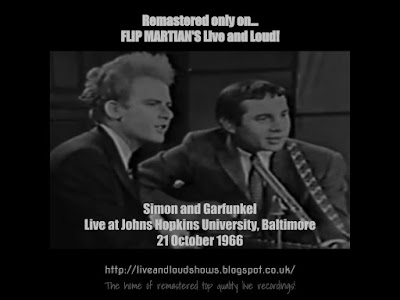 Since first meeting in 1953, S and G have worked apart more than together, since their first hit record together in 1957 under the name “Tom and Jerry”. Their first album together was released in 1964 and didn't do sell well at the time, with Paul Simon choosing to then go to England and play on the folk circuit, with Art Garfunkel continuing his studies at university in America.

A second album was recorded and released at the beginning of 1966 on the back of a huge surprise hit with Sound of Silence. They then spent several months in the studio later in 1966 recording a follow up to that - a time when they began to exert more control in the studio and the recording process. By the Autumn they had just released their 3rd album, Parsley, Sage, Rosemary and Thyme before resuming their touring schedule of American colleges.

And that's where we find them on this recording. They begin the set with A Hazy Shade of Winter - released as a single the following day.


UPDATE 2019
While preparing this old show as separate files for a donator to the site, I found I could now improve the sound quality far beyond what was originally done to the recording back in 2016.  Further, "A Poem On The Underground Wall" was in the wrong place entirely...and no-one told me! But all fixed now.

Or, if you would like to have separate tagged MP3s for the price of half a cup of coffee, or even lossless files in FLAC format, head on over to the Donations tab to see how you can obtain these for a very small donation towards the site costs.

Setlist
A Hazy Shade Of Winter
Cloudy
Teenage Moron
Benedictus
Blessed
A Poem On The Underground Wall
I Am A Rock
Anji
The Sound Of Silence
Sparrow
For Emily, Whenever I May Find Her
A Church Is Burning

Email ThisBlogThis!Share to TwitterShare to FacebookShare to Pinterest
Labels: 1966, Simon and Garfunkel