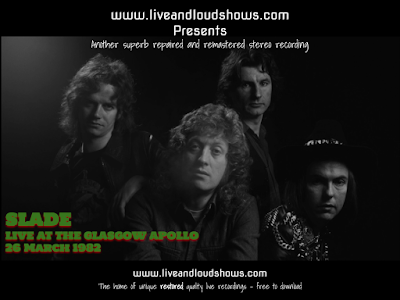 This show was originally sent to me by a listener requesting that as I'd done a couple of Slade shows before, could I have a go at this one? After a trial go on the MP3s they'd sent, I eventually found a lossless copy online and worked from that.

Originally an FM broadcast, but the first half was significantly lower quality than the second - until the end of Lock Up Your Daughters the sound was far flatter and muffled. And in mono! So I've worked on the 2 sides separately and then brought them together. I used some studio tools on part 1 to open the sound out a bit so it sounded closer to part 2 and then there was a lot of work with EQing both sides separately to sort out. In fact, I've had several goes at this on and off over the last few months - but hopefully you will enjoy the result.

It was worth persevering with - the show really rocks! Maybe 1982 could be said to be in the twilight of their careers but Slade were still on top form and sounding like they enjoyed every minute - as does a noisy Apollo crowd.

You can safely download all of this improved recording for free HERE as one 320 kbps MP3 file with no pop up ads getting in the way.

By the way - you can read a great review of this gig, right HERE.
Posted by Flip Martian at 12:31

Email ThisBlogThis!Share to TwitterShare to FacebookShare to Pinterest
Labels: 1982, Slade