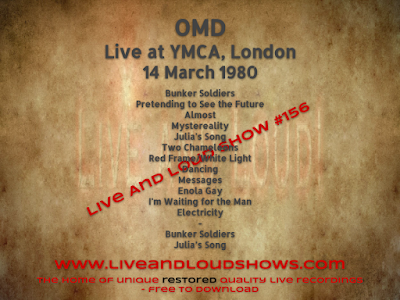 This audience recording was originally sent to me by a regular listener to these shows, along with a request..."can you do something with this?".

Well, you can hear a clip of what he sent me in the intro in the file below but basically...I didn't think I could! It sounded like it was recorded outside the venue, through a door. The recording had deteriorated quite a bit, it was running at the wrong speed, there were several bits of distortion...there was a lot to do. But I honestly didn't think there was enough of the gig itself there to do much with.

But I had a go, and I was wrong! It was never going to end up as a crystal clear recording worthy of an official release but after spending quite a few hours on it - it has turned out very listenable! And at least now sounds like it was recorded INSIDE the venue...and Andy no longer sounds like he's been castrated...

So download it, have a listen to the intro, the original recording...and then the restoration and hear the difference! An interesting set, featuring a very early live airing for the as yet unreleased Enola Gay, and a cover of Dalek I Love You's Two Chameleons and The Velvet Underground's Waiting For The Man.