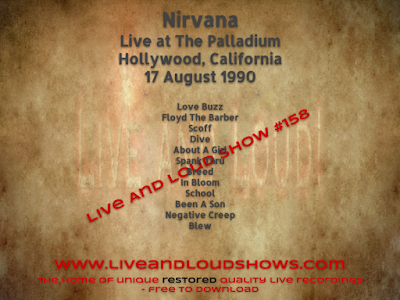 A debut on Live and Loud! for Nirvana, in a restored recording from their tour of the west coast of America with Sonic Youth in August 1990.

The recording was generally in good shape - I removed a couple of clicks, sorted out the sound balance and repaired a gap in 1 of the songs - anyone not familiar with the original bootleg won't be able to tell where that was now! Once that was done, using the 30 band EQ brought back the kick drum, created some space and lifted Kurt's voice, creating a much clearer recording. This is a great record of how Nirvana sounded after losing Chad Channing on drums and before they met Dave Grohl and went on to record Nevermind the following year.

Email ThisBlogThis!Share to TwitterShare to FacebookShare to Pinterest
Labels: 1990, Nirvana