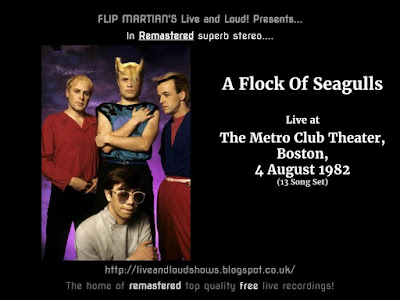 Well, long time listeners to Live and Loud! will know I've done a Seagulls gig before (you can find that here) but I was never completely happy with it - the original recording had been badly treated before I got it so I could only do so much. Recently I came across some other gig recordings by the band so have had chance to do a better one!

Even so there were some weird things going on; it was too fast, so it needed slowing down a little; the first 2 songs sounded had very different sound quality to the rest of the gig (!) so I had to treat them differently and make those 2 tracks sound closer to the rest of the set. And finally, I thought I'd finished it, then came back to it a few days later and realised I didn't like what I'd done so had to remedy that and make it sound better! So a fair amount of work - but well worth it, AFOS were a great live band back then and this is a great performance by them.  The set is mainly songs from the debut album but there are 3 new tracks which appeared on their 2nd album, "Listen", the following year.

I think 9 songs from this gig are on another bootleg recording - possibly its a King Biscuit Flower Hour radio show. This however, is a recording of the gig taken from the mixing desk on the night, so includes more of the songs - whether its actually the complete set, I can't say (there's no "(Its Not Me) Talking" in the set for example). Anyway, this recording has never sounded better, I hope. Enjoy!

Setlist
Modern Love Is Automatic
Messages
Standing in the Doorway
Committed
The Fall
Space Age Love Song
D.N.A.
Electrics
Man Made
The Traveller
You Can Run
Telecommunication
I Ran
Posted by Flip Martian at 11:17

Email ThisBlogThis!Share to TwitterShare to FacebookShare to Pinterest
Labels: 1982, A Flock of Seagulls