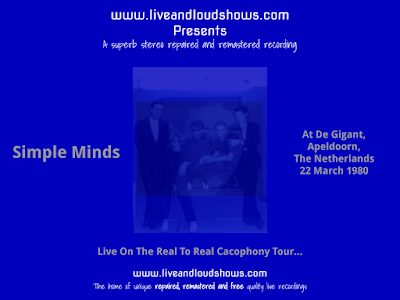 A truncated recording of Simple Minds on their tour of late 1979 and early 1980, in support of the Real To Real Cacophony album, originally (I think) from Dutch radio. There is a more well known recording from Amsterdam from the following night but I chose this less well known one which needed a bit of work. This responded well to being cleaned up with some EQ and sounds really good, although I had to fade out the last track "Pleasantly Disturbed" as it's chopped off on the source recording.