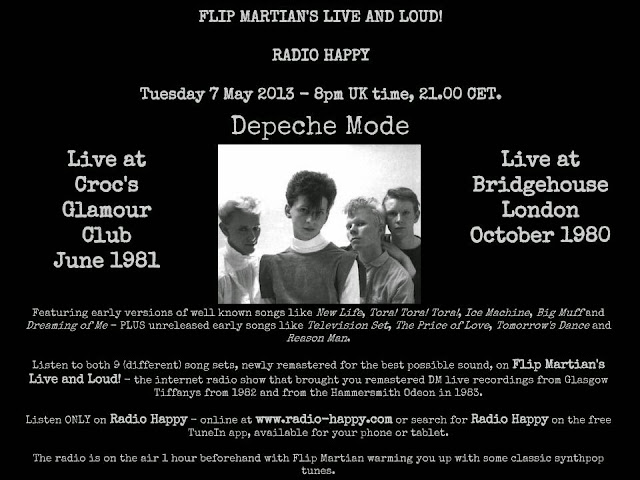 2 for the price of 1 this time - I found these gigs and couldn't resist trying to restore them. Depeche Mode just before they hit the big time. The 1981 gig is a real gem - a gig 2 weeks after New Life, their first single to breach the charts, was released. I think this was a soundboard recording, its polished up really well - an exciting, raw performance with nothing but a reel to reel tape recorder and analogue synths.

And if you ever wondered how Just Can't Get Enough would sound starting with a bossa nova rhythm...well, you came to the right place...

The Croc's gig is quite short so back in 2013 I broadcast it along with an even earlier gig I found - one of their earliest gigs that exists on tape - from the Bridgehouse in London from October 1980. This was several months before the release of their first single, "Dreaming of Me".  The version I had then was an audience recording and had been "restored" by someone already to remove tape hiss - not too well. So while I was able to make it pretty listenable, it still wasn't great, hence it being a bonus here and not the main show. Even so, its fascinating and still entertaining to hear DM play several unreleased tracks and early versions of other songs which would become well known later.

2019 UPDATE
While preparing this old show as separate files for a donator to the site, I found I could now improve the sound quality of the Croc's gig further, over what I’d originally done to the recording back in 2013. I also found a different recording of the Bridgehouse recording! Which revealed the copy I had in 2013 was missing a song, and was in the wrong order! So I set to work on this other recording, starting from scratch. It had been "mastered" by someone in the past but had distorted bass through much of it and sounded quite murky. I've been able to remove most of that bass distortion and also widen the sound a bit, so it seems quite a bit clearer! It's a vast improvement on the earlier version I had from 6 years ago.

You can now download these new versions of the 2 shows HERE as 1 new 320kbps MP3 file.