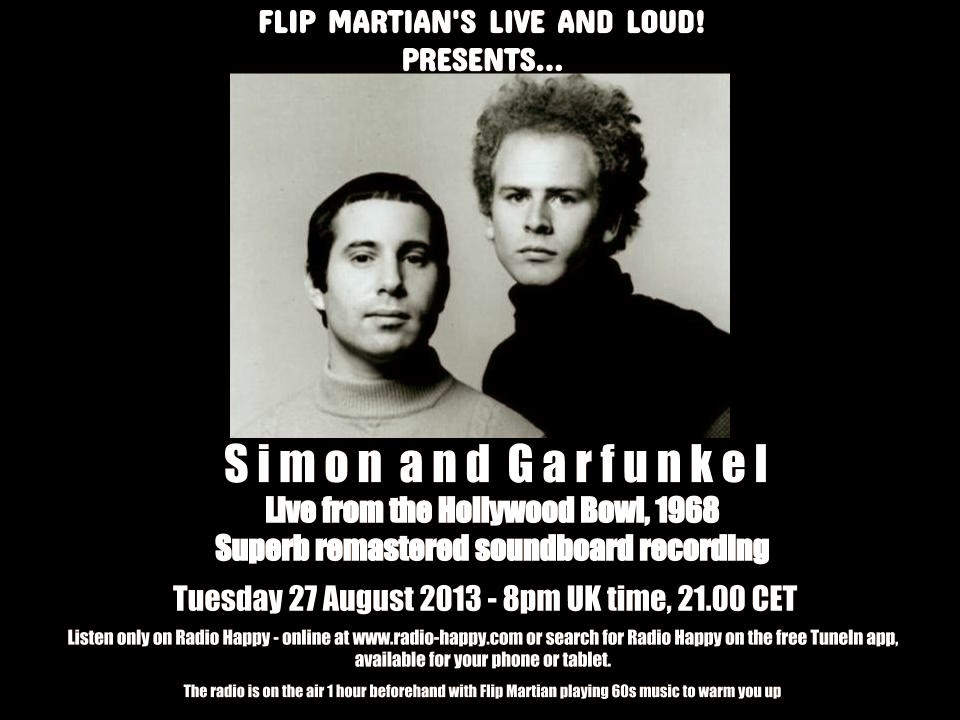 They released their 4th album "Bookends" in March 1968 and spent a lot of time gigging that year. Clearly, playing the Hollywood Bowl, they were a big deal by 1968 and they deliver a superb set in this recording.

A wonderful performance full of energy and good humour. The performance was recorded by Al Kooper, and was possibly intended for an official live album. A few recording anomalies (the guitar hitting Paul's mic stand and tape saturation) likely commanded a veto from the CBS Records executives. It's a shame, because, aside from a few recording baubles, the show is certainly worth an official release. I hope you enjoy this version instead! Of special note are the performances of "Overs," "At The Zoo," "Leaves That Are Green," "The Dangling Conversation," and "Old Friends / Bookends."

I'm told this recording was released as a bootleg entitled "Voice of Intelligent Dissent" in its original form. I hope those of you who know that enjoy what I've done with it. Its a soundboard recording of the full gig and with some noise reduction and light tidying up, it sounds superb. I hope you enjoy it.

Setlist
Mrs. Robinson
Homeward Bound
April Come She Will
Fakin' It
Overs
The 59th Street Bridge Song (Feelin' Groovy)
America
A Most Peculiar Man
I Am A Rock
At The Zoo
Scarborough Fair/Canticle
Bye Bye Love
Cloudy
Leaves That Are Green
Punky's Dilemma
Benedictus
The Dangling Conversation
For Emily Wherever I May Find Her
A Poem On The Underground Wall
Anji
The Sound Of Silence
Richard Cory
Old Friends
He Was My Brother
Posted by Flip Martian at 07:44

Email ThisBlogThis!Share to TwitterShare to FacebookShare to Pinterest
Labels: 1968, Simon and Garfunkel