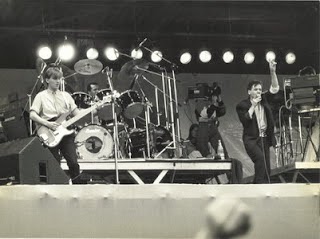 I must admit that while I'm quite a fan of Simple Minds from their early days, by 1983 they'd gone a bit overblown for my tastes - but then, that's just as they got really popular I suppose, so what do I know?! :-)

This is a soundboard recording which is slightly bass heavy even after remastering but still acts as a great record of Simple Minds appearing at this annual festival in Werchter, Belgium.

UPDATE. While preparing this older show as separate files for a donator to the site, I found I could now improve the sound quality further, over what I’d originally done to the recording several years ago. You can now download this new version (as of 2018) HERE as 1 new 320kbps MP3 file.

Setlist
Somebody Up There Likes You
Premonition
Hunter and The Hunted
The Big Sleep
The American
Glittering Prize
King Is White and In The Crowd
Thirty Frames a Second
Promised You a Miracle
Someone Somewhere In Summertime
Street Hassle
New Gold Dream/Take Me To The River
Posted by Flip Martian at 09:09